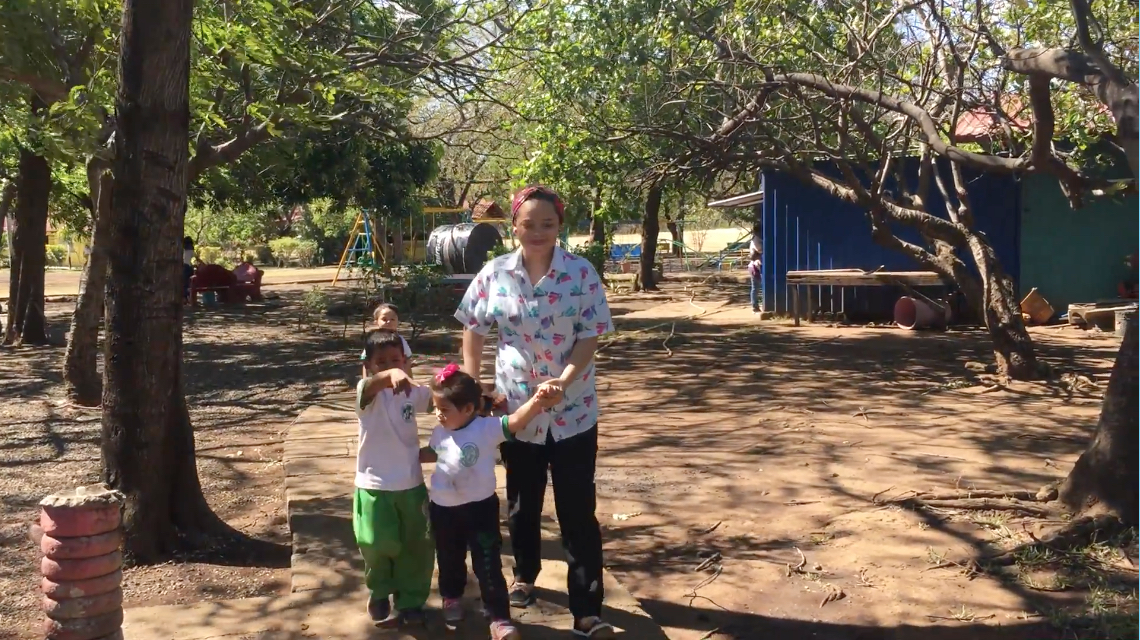 Sharon always wanted to be a biology teacher. Or as least she thought so.

“I love preschool,” Sharon says through an interpreter. “I love my job. I feel that I have that vocation. There are times now when I think I will dedicate my life to teaching preschool.”

Sharon is the first former Havila student to return to the school as a teacher. She co-teaches a combined P1 and P2 class, which is 3- and 4-year-olds and therefore about as far away from high school biology as you can get.

“I always thought of myself as a teacher, but I didn’t think of Havila as an option,” Sharon says. “I was thinking of teaching biology, and Havila didn’t offer biology until this year. After my first year of university, my parents told me they couldn’t support me any more. I felt really bad. In less than a week, (Havila superintendent) Pastora asked me if I could teach P2.”

So here she is, back where she started her own journey as a student. Sharon was a preschool student at Havila when it first opened in 2005. “My parents tried to give me values as a child, and they saw a great opportunity of having a Christian school in this community,” she says. “In the midst of financial difficulties, they did their best. They were happy to find what they wanted in a school.”

Sharon attended Havila through sixth grade, which was as far as it went at the time, then completed secondary school at the public school in Los Cedros. She says she received an excellent education at Havila and had inspiring role models for teachers.

“My mother always told me to follow after teachers like Ena and Cela,” Sharon says. “They are such honest, dedicated, and responsible women.”

Now, they are her colleagues. “I am so thankful to be able to work with the angels of my childhood,” Sharon says. “Cela, Fatima, Ena, Jazmina, Karla, Marco. We didn’t have a family in this community, and I found a family in this school.”

Sharon is thrilled to be part of the team at Havila, which she says is a critical asset to Los Cedros. “Of course, it is,” she says. “I have seen throughout all of these years the many kids who don’t have the resources to be in a public school. They have the opportunity to study here and grow as a person.”

She says that even though public schools in Nicaragua do not charge tuition, other costs related to attending school are just too much for some families. “Uniforms, school supplies, activities and projects that you have to donate to or things you have to provide for assignments, there are a lot of things that require money,” she says.

Sharon is the youngest teacher at Havila by some margin. Between that and being a former student, she takes her share of teasing from the rest of the staff. One of her colleagues calls her “Doc” because she always wears a smock over her normal clothes.

She says the smock is non-negotiable. “I have to wear one,” she says. “There is too much hugging when the students are dirty.”

As for that career teaching biology, it’s still a possibility. Sharon is taking university classes on weekends to continue to work toward that goal. But she’s less and less certain that is her true calling. Asked if she would trade preschool for high school biology, Sharon pauses. “I wouldn’t know,” she says, “I really don’t know.”